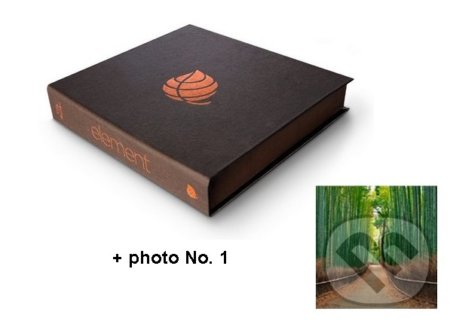 This unique luxury limited edition in box contains also a photo on an aluminum plate signed by the author (book with photo No. 1 Arashiyama, Japan)... Číst víc

This unique luxury limited edition in box contains also a photo on an aluminum plate signed by the author (book with photo No. 1 Arashiyama, Japan)... Číst víc

This unique luxury limited edition in box contains also a photo on an aluminum plate signed by the author (book with photo No. 1 Arashiyama, Japan). In a portfolio are these photos:
No 1. Arashiyama, Japan
No 2. Grand Prismatic Spring, USA
No 3. Spišský hrad, Slovakia
No 4. Národný park Slovenský raj, Slovakia

Traveler and photographer Filip Kulisev, MQEP (Master Quali- ed European Photographer) and FBIPP (Fellow of the British Institute of Professional Photography) has reworked his photographs of nature scenes over the past decade to make them among the world’s best. His newest release, Element, builds on the success of his previous book, Amazing Planet, published in 15 languages. Through his photos he seeks to present the diversity and charm of Earth’s four basic climatic zones at dif- ferent times of the year. These zones also symbolize the four basic elements shaping the nature of our planet since its very beginning.

In the polar regions of the Arctic and Antarctic, water dominates in the form of ice caps and glaciers stretching to the horizon and providing shelter and habitat to many endangered animals. The temperate climates feature mountain ranges, rocky cli s and caves Earth has ingeniously created. The evergreen and climatically comfortable subtropics are characterized by pleasant air that cools in summer, while protecting against cold winds from the north in winter. Fire comes from sunlight, scorching deserts and bringing eternal summer to the tropics.

More than 400 photographs taken by Kulisev during his travels highlight geographical realities about the places he has visited. If you view them with open eyes and an open mind, you will see the symphony of the four elements of our planet, whether standing in front of the blood red, sun-baked Uluru in Australia, before the glacial walls of Spitsbergen, on the last bit of solid ground before the North Pole, or taking in the rich palette of colors of an Indian summer in Maine.

This edition featuring signed photographs on aluminum plates comes in a box.