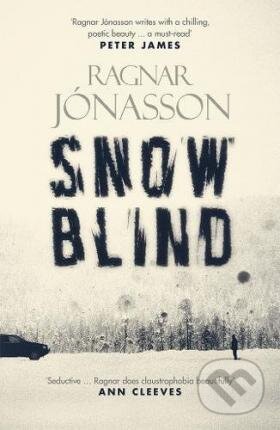 First in a series of stunning Icelandic crime thrillers, by international, bestselling author, set in tiny, snowbound town, accessible by a single tunnel...

First in a series of stunning Icelandic crime thrillers, by international, bestselling author, set in tiny, snowbound town, accessible by a single tunnel.
A murder takes place in the isolated Icelandic town of Siglufjordur, where an avalanche has cut off all communication and the unrelenting snow threatens rookie police officer Ari Thor Arason first investigation...

'A modern Icelandic take on an Agatha Christie-style mystery, as twisty as any slalom...' Ian Rankin

'A chiller of a thriller' Carol Memmott, Washington Post

'Snowblind is a beautifully written thriller, as tense as it is terrifying - Jonasson is a writer with a big future' Luca Veste

Siglufjoerdur: an idyllically quiet fishing village in Northern Iceland, where no one locks their doors - accessible only via a small mountain tunnel.

a rookie policeman on his first posting, far from his girlfriend in Reykjavik - with a past that he's unable to leave behind.

When a young woman is found lying half-naked in the snow, bleeding and unconscious, and a highly esteemed, elderly writer falls to his death in the local theatre, Ari is dragged straight into the heart of a community where he can trust no one, and secrets and lies are a way of life.

An avalanche and unremitting snowstorms close the mountain pass, and the 24-hour darkness threatens to push Ari over the edge, as curtains begin to twitch, and his investigation becomes increasingly complex, chilling and personal. Past plays tag with the present and the claustrophobic tension mounts, while Ari is thrust ever deeper into his own darkness - blinded by snow, and with a killer on the loose.