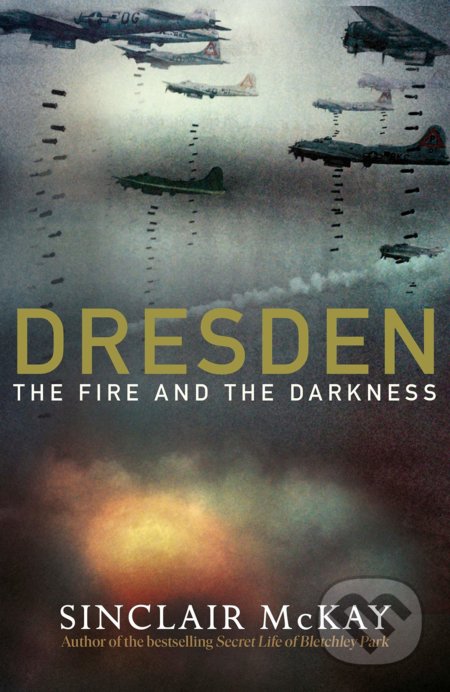 The Fire and the Darkness

In February 1945 the Allies obliterated Dresden, the 'Florence of the Elbe'. Bombs weighing over 1,000 lbs fell every seven and a half seconds and an estimated 25,000 people were killed. Was Dresden a legitimate military target or...

Published for the 75th anniversary

In February 1945 the Allies obliterated Dresden, the 'Florence of the Elbe'. Bombs weighing over 1,000 lbs fell every seven and a half seconds and an estimated 25,000 people were killed. Was Dresden a legitimate military target or was the bombing a last act of atavistic mass murder in a war already won?

From the history of the city to the attack itself, conveyed in a minute-by-minute account from the first of the flares to the flames reaching almost a mile high - the wind so searingly hot that the lungs of those in its path were instantly scorched - through the eerie period of reconstruction, bestselling author Sinclair McKay creates a vast canvas and brings it alive with touching human detail.

Along the way we encounter, among many others across the city, an elderly air-raid warden and his wife vainly striving to keep order amid devouring flames, a doctor who carried on operating while his home was in ruins, novelist Kurt Vonnegut who never thought that his own side might want to unleash the roaring fire, and fifteen-year-old Winfried Bielss, who, having spent the evening ushering refugees, wanted to get home to his stamp collection.

Impeccably researched and deeply moving, McKay uses never-before-seen sources to relate the untold stories of civilians and vividly conveys the texture of contemporary life. Dresden is invoked as a byword for the illimitable cruelties of war, but with the distance of time, it is now possible to approach this subject with a much clearer gaze, and with a keener interest in the sorts of lives that ordinary people lived and lost, or tried to rebuild.

Writing with warmth and colour about morality in war, the instinct for survival, the gravity of mass destruction and the importance of memory, this is a master historian at work.
Čti víc

'Powerful . . . there is rage in his ink. McKay's book grips by its passion and originality. Some 25,000 people perished in the firestorm that raged through the city. I have never seen it better described' Max Hastings, Sunday Times

'Churchill said that if bombing cities was justified, it was always repugnant. Sinclair McKay has written a shrewd, humane and balanced account of this most controversial target of the Anglo-American strategic bombing campaign, the ferocious consequence of the scourge of Nazism' Allan Mallinson, author of Fight to the Finish

'This is a brilliantly clear, and fair, account of one of the most notorious and destructive raids in the history aerial warfare. From planning to execution, the story is told by crucial participants - and the victims who suffered so cruelly on the ground from the attack itself and its aftermath' Robert Fox, author of We Were There