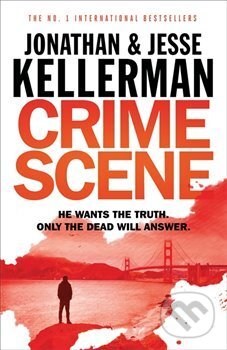 Crime Scene is the next enthralling psychological thriller from Number One bestsellers and masters of the genre, Jonathan and Jesse Kellerman. Natural causes or foul play? That's the question deputy coroner Clay Edison must answer...

Crime Scene is the next enthralling psychological thriller from Number One bestsellers and masters of the genre, Jonathan and Jesse Kellerman.

Natural causes or foul play? That's the question deputy coroner Clay Edison must answer each time he examines a body. Figuring out motives and chasing down suspects aren't part of his beat - until a seemingly open-and-shut case proves to be more than meets his highly trained eye. Eccentric, reclusive Walter Rennert lies cold at the bottom of his stairs. At first glance the scene looks straightforward: a once-respected psychology professor done in by booze and a bad heart. But his daughter Tatiana insists that he has been murdered, and she persuades Clay to take a closer look at the grim facts of Rennert's life. When Clay learns that Rennert's colleague died in a nearly identical manner, he becomes even more determined to discover the truth behind the man's death. The twisting trail Clay follows will lead him into the darkest corners of the human soul. It's his job to listen to the tales told by the dead. But this time, he's part of a story that makes his blood run cold. Biographical Notes Jonathan Kellerman is one of the world's most popular authors. He has brought his expertise as a clinical psychologist to three dozen bestselling crime novels, including the Alex Delaware series. With his wife, the novelist Faye Kellerman, he also co-authored the bestsellers DOUBLE HOMICIDE and CAPITAL CRIMES. He has won the Goldwyn, Edgar and Anthony Awards and has been nominated for a Shamus Award.

Jesse Kellerman is the author of five novels. He has won several awards for his writing, including the 2003 Princess Grace Award, given to America's most promising young playwright, and the 2010 Grand Prix des Lectrices de Elle for THE GENIUS. POTBOILER was also nominated for a best novel Edgar Award by the Mystery Writers of America. He lives with his wife and son in California.
Čti víc

They have a way of scaring you, of chasing sleep away, these psychological thrillers that send your heard thumping. Imagine, then, what you're in for when two masters of the genre decide to collaborate.
- Huffington Post