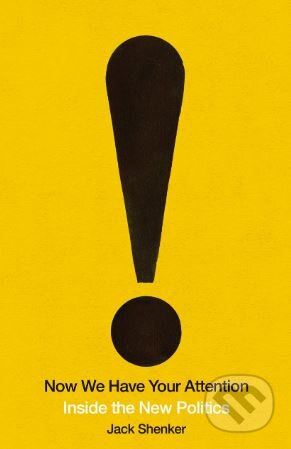 Now We Have Your Attention

Inside the New Politics

The first full investigation, based on exceptional access to underground and alternative political movements, of the revolution that will reshape our world in the coming decades...

The first full investigation, based on exceptional access to underground and alternative political movements, of the revolution that will reshape our world in the coming decades. In the wake of conventional politics’ dramatic implosion, a vast new range of ideas and political groups are emerging from the wreckage. The landscape has changed so dramatically that, so far, none of the deluge of opinion and commentary has been able to make any real sense of it. In 2011, at the age of 25, Jack Shenker was appointed the Guardian’s Egypt correspondent and broke the news, on the ground, day by day, of its Arab Spring. Now this ferociously talented young journalist will do the same for Britain, reporting on the revolution in our midst. From inside the activist communities, campaign groups and protest movements that are now emerging throughout the country – including exclusive access to Momentum – he will introduce the reader to a relatively young, entirely fearless new generation who have nothing to lose and for whom none of the old assumptions apply.

Now We Have Your Attention is the first full and proper inside guide to this completely new paradigm of political behaviour. It is the book you need to understand politics now – and its trajectory in the coming decades.
Čti víc
Našli jste v našem obsahu nějaké nepřesnosti?
Dejte nám o tom vědět.
Nahlásit chybu