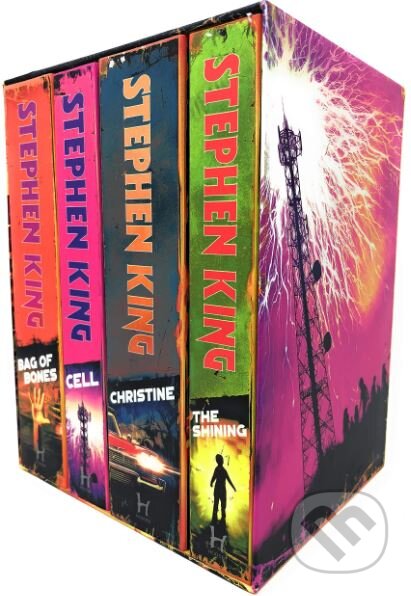 Bag of Bones. When Mike Noonans wife dies unexpectedly, the bestselling author suffers from writers block. Until he is drawn to his summer home, the beautiful lakeside retreat called Sara Laughs. Here Mike finds the once familiar town ...

Bag of Bones: When Mike Noonans wife dies unexpectedly, the bestselling author suffers from writers block. Until he is drawn to his summer home, the beautiful lakeside retreat called Sara Laughs. Here Mike finds the once familiar town in the tyrannical grip of millionaire Max Devore. Devore is hell-bent on getting custody of his deceased sons daughter and is twisting the fabric of the community to this purpose. Three year old Kyra and her young mother turn to Mike for help. And Mike finds them increasingly irresistible. But there are other more sinister forces at Sara Laughs - and Kyra can feel them too.

The Shining: Danny is only five years old, but in the words of old Mr Hallorann he is a shiner, aglow with psychic voltage. When his father becomes caretaker of the Overlook Hotel, Dannys visions grow out of control. As winter closes in and blizzards cut them off, the hotel seems to develop a life of its own. It is meant to be empty. So who is the lady in Room 217 and who are the masked guests going up and down in the elevator. And why do the hedges shaped like animals seem so alive. Somewhere, somehow, there is an evil force in the hotel - and that, too, is beginning to shine.

Christine: Christine, blood-red, fat, and finned, is twenty. Her promise lies all in her past. Greedy and big, she is Arnies obsession, a 58 Plymouth Fury. Broken down but not finished. There is still power in her -a frightening power that leaks like sump oil, staining and corrupting. A malign power that corrodes the mind and turns ownership into Possession. This is the story of a lovers triangle.

Cell: Civilization slipped into its second dark age on an unsurprising track of blood but with a speed that could not have been foreseen by even the most pessimistic futurist. By Halloween, every major city from New York to Moscow stank to the empty heavens and the world as it had been was a memory. The event became known as The Pulse. The virus was carried by every cell phone operating within the entire world. Within hours, those receiving calls would be infected. A young artist Clayton Riddell realises what is happening. He flees the devastation of explosive, burning Boston, desperate to reach his son before his son switches on his little red mobile phone.
Čti víc
Našli jste v našem obsahu nějaké nepřesnosti?
Dejte nám o tom vědět.
Nahlásit chybu