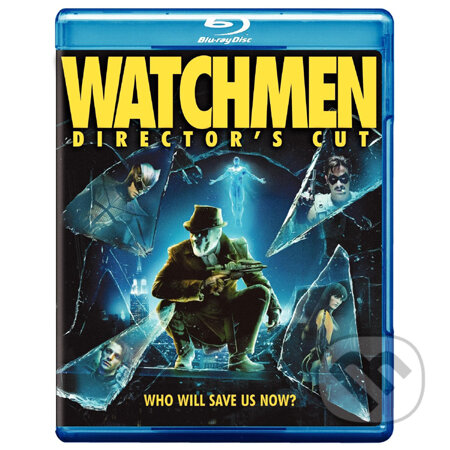 The extended director's cut restores 24 minutes of connective tissue to the 162-minute film, most significantly the last scene of Hollis Mason, the first Nite Owl. Other elements help restore and fill in details that had been in the graphic novel...

The extended director's cut restores 24 minutes of connective tissue to the 162-minute film, most significantly the last scene of Hollis Mason, the first Nite Owl. Other elements help restore and fill in details that had been in the graphic novel. Fans of the film will be glad for the extra footage but there's nothing momentous that will change anyone's basic like or dislike of the film.

By far the most interesting Blu-ray feature (in addition to the great picture and DTS-HD Master Audio sound) is the Maximum Movie Mode, which incorporates several features into the viewing experience. Director Zack Snyder periodically appears on screen in front of two large monitors, one continuing to play the movie and the other displaying special-effects shots or scenes from the graphic novel. Snyder talks about how he shot the film and points out details in a variety of scenes: the opening with the Comedian, Dr. Manhattan's lab, the Nite Owl ship, Mars, Antarctica, and the ending (and why it was changed for the movie). This feature is much more interesting than an audio commentary or a standard picture-in-picture commentary so it'd be nice if it had been done for more scenes. Also appearing in Maximum Movie Mode is a timeline contrasting events in the Watchmen world with the "real world," occasional picture-in-picture comments by cast and crew, still galleries, and a series of 11 "focus points" that allow you to exit the film to watch these three-minute featurettes (sets, costumes, the Minutemen, etc.). Worthy of mention is how easy the Maximum Movie Mode material is to find: Snyder's footage and the focus points are very visible (even in fast-forward), and you can also access the focus points directly from the main menu.

The second disc has three documentaries. The first, "The Phenomenon: The Comic That Changed Comics," 29 min.), looks at the original graphic novel and its themes, and interviews artist Dave Gibbons, DC Comics executives Jenette Kahn and Paul Levitz, and cast and crew, illustrating its points with scenes from the movie, panels from the graphic novel, and parts of the motion comic. The next two are only on the Blu-ray disc but are less interesting and of varying relevance to the movie. "Real Superheroes, Real Vigilantes" (26 min.) examines real-life vigilantes including the Guardian Angels and New York subway gunman Bernard Goetz and compares them to Rorschach. "Mechanics: Technologies of a Future World" (17 min.) spotlights a physicist who served as a consultant on the movie. He talks about his experiences then discusses whether elements from the movie, such as Dr. Manhattan, the Owl Ship, and Rorschach's mask could really work. There's also My Chemical Romance's "Desolation Row" music video , and BD-Live offers even more making-of material. A third disc with a Digital Copy of the film (compatible with both iTunes and Windows Media; download code expires July 21, 2010) was included with early shipments of the Blu-ray disc but is no longer available.