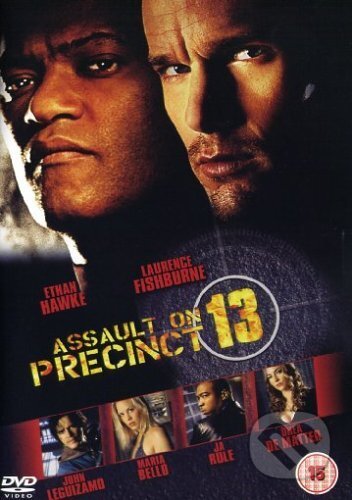 In 1976, John Carpenter paid homage to Howard Hawks' superlative western RIO BRAVO with his second full-length feature film, ASSAULT ON PRECINCT 13. Now it's Carpenter's turn to experience some cinematic adulation, with this remake of the film from director Jean-FranÃ§ois Richet. Set in Detroit, Richet's film focuses on police Sergeant Jake Roenick, whose failed career as an undercover cop has lead to a New Years Eve stint in charge of the dilapidated Precinct 13. As a snowstorm rattles the windows and doors of the rundown station, Roenick exchanges some festive banter with police psychologist Alex Sabian (Maria Bello); curvaceous secretary Iris Ferry (Drea de Matteo); and retiring veteran Jasper O'Shea (Brian Dennehy). But their merriment is interrupted when a diverted prison bus escapes the ravages of the storm, seeking a temporary haven for its peccant passengers in Precinct 13. Criminal mastermind Marion Bishop (Laurence Fisburne) is on board, along with a junkie, Beck (John Leguizamo), and two young felons, Smiley (Ja Rule) and Anna (Aisha Hinds). Hot on their tail comes police detective Marcus Duvall (Gabriel Byrne), a crooked cop who wants Bishop dead before he testifies against Duvall in court. Bringing a formidable army of fellow corrupt officers with him, Duvall puts the police station under siege in order to snag his man before it's too late. But he doesn't bank on the impressive wiles of Roenick and his rag-tag mixture of cops and criminals, who unite in an attempt to defend themselves from an execrable ending at the hands of Duvall and his men. A highly entertaining action romp ensues, with director Richet delivering a fast-paced thriller laced with violence and surprising plot twists, ensuring viewers are kept on their toes right up until the film's blood-soaked finale.
Číst víc