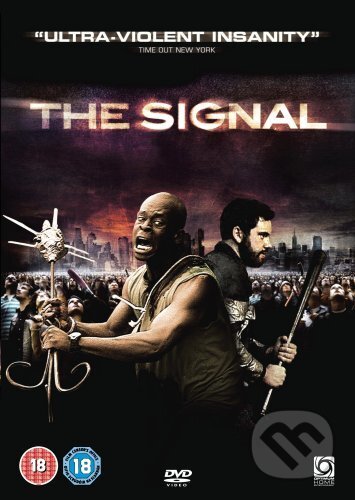 Much like 28 DAYS LATER, THE SIGNAL is a zombie film in disguise asking the question, 'hat would you do if everyone suddenly turned psychotic?'Conceived by...

Much like 28 DAYS LATER, THE SIGNAL is a zombie film in disguise asking the question, 'hat would you do if everyone suddenly turned psychotic?'Conceived by...

Much like 28 DAYS LATER, THE SIGNAL is a zombie film in disguise asking the question, 'hat would you do if everyone suddenly turned psychotic?'Conceived by Atlanta filmmakers Jacob Gentry, Dan Bush, and David Bruckner as an exercise in which each would write and direct one of three acts, the result is an experimental and apocalyptic horror tale with a for-fans-by-fans mentality that is cerebral and visceral, both disturbing and thought-provoking. In the first segment, it is New Year's Eve in the city of Terminus, and Mya (Anessa Ramsey) has just begun an extramarital affair with Ben (Justin Welborn). As she leaves his apartment, he turns on the television to witness a noisy and colouful swirl. The mysterious transmission affects all television, radio, and cell phone signals, causing normal citizens to transform into bloodthirsty killers. By the time Mya reaches her apartment, her building is littered with corpses, and her husband, Lewis (A.J. Bowen), shows the first signs of the condition, causing Mya to flee for safety. Part two is a bleak domestic comedy in which Lewis, searching for his wife, invades the home of a young couple preparing for a party only to kill several potential guests. In the final segment, Ben and Lewis traverse an intensely chaotic landscape in a race to find Mya.

With this artful and hard-hitting creation, Gentry, Bush, and Bruckner, have tried to cover all the bases, right down to an amusingly grotesque RE-ANIMATOR homage in the final act. Though clearly a low-budget production (we never see destruction on a very wide scale), the film overcomes such limitations with an intensity that lasts throughout the duration, and the cast of unknowns enhances the creepiness of the proceedings. Right from its opening sequence—a creepy film-within-a-film—THE SIGNAL establishes itself as one for horror aficionados.
Čti víc
Našli jste v našem obsahu nějaké nepřesnosti?
Dejte nám o tom vědět.
Nahlásit chybu